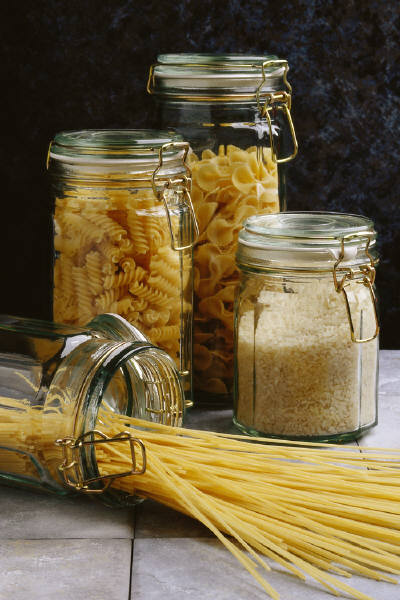 Dried pasta, an essential store-cupboard staple, is fast food the Italian way. When we're stressed out, in a hurry and with little time for cooking, this is the answer. Served with a simple tomato sauce and some fresh herbs or a grating of Parmesan cheese and a drizzle of olive oil, plus a green salad on the side, you can have a tasty, nutritious and inexpensive meal on the table in under 30 minutes.

Pasta has a long history and was known in ancient Rome and Persia. The first Italian reference dates back to 1154 when the Sicilians were making it and exporting throughout the Mediterranean and the Middle East.

Today, there are about 200 different pasta shapes, both long and short, and they may be known by more than one name depending on which region of Italy they are from ~ spaghetti, macaroni (the name by which all pasta was originally known), fusilli and farfalle, to name but a few, are among the most common and are known world-wide.

As far as pasta types go, there are fresh and dried varieties. Fresh pasta is usually made with egg and dried without. Fresh pasta is used to make shaped or sheet pasta such as ravioli and lasagne while dried is used for long and short tubular pasta such as tagliatelle and penne. Fresh and dried pastas are very different ~ dried durum wheat pasta is much lighter and easier to digest than fresh pasta, which is much heavier due to the protein content of the egg.

Dried pasta should always be cooked in lots of boiling, well-salted water ~ 1 litre plus 10g of salt per 100g of pasta. Bring the water to a rolling boil, adding the salt as it starts to boil. Once the pasta is added, it should return to a rolling boil as soon as possible so that it cooks evenly. Stir the pasta gently ensuring that it doesn't stick together and cook until al dente, literally meaning 'to the tooth', that is 'firm to the bite'. Overcooked pasta is soft, has lost most of its flavour and structure and will turn the water cloudy as all the starch has leached out of it. Once it is cooked, drain and toss with your choice of sauce. Pasta should not be rinsed as washing away all the starch means that the sauce won't cling to it.

The recipes found on these pages are all made with dried pasta. Unfortunately, as I am allergic to wheat, I substitute gluten-free pasta for myself but not for family or friends. Although some gluten-free brands are very good, sadly, they don't quite match up to wheat pasta.